Following on from last week's scout class, this article explores new thief synergies. These seek to grant something to the Thief class without radically changing the class build.

I see synergies as similar to the fighter damage bonus solution to fighters, except that it was never added to the base thief class as it was for fighters. But with the proposed four, I'm thinking we need more.

The current synergies and pairings of thief skill are:


What's missing? There are eight 'thief skills', excluding backstab which is more a combat skill and the reading skills. That gives 28 possible combinations, too many for now, I want to add four more.

Let's bunch them up. Move silently and hide in shadows pair up nicely, forming the two stealth skills. Find and remove traps are not even separated in the base thief table, barely being separate skills, and are very mechanical skills. This leaves only four, the skills for pick locks and pick pockets are very much thief skills. Finally the remaining two, climbing and hear noise, relate in that they are very physical skills.

I use this sketch to map them out: 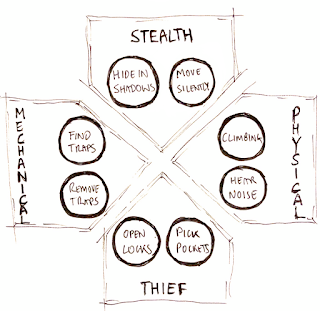 
Everyone thinks backstab is a thing but it’s hard to setup. Hiding in combat can't be done, but what if it could? After all shadowy senses adds an infravision of sorts, why not an invisibility, of sorts.

Many a house rule enables thief’s to use concealment in and around a fight. Inspired by reapers in Xcom 2, why can’t you take advantage of the chaos and enter concealment.

Fog of war (hide in shadows + move silently): the characters mastery of concealment and misdirection allows them to move around a battlefield with impunity. As an action during a melee combat where they are not alone they may test against hide in shadows to enter concealment. While concealed the character is treated as invisible so long as they stay within a 30 ft radius of a melee battle. They are not magically invisible and are taking advantage of the chaos and noise of combat to avoid notice. Combatants are broadly aware that the character is still present and may take a hear noise test to locate the concealed character and break the concealment. This effect is lost as soon as they attack, which treats opponents as surprised.


Let's keep the next one simple, being better at traps. This gives more speed and the ability to bypass traps. Also adds the text to reset or build traps, though like the trapping proficiency I leave this up to the judge.

Trap mastery (find traps + remove traps): the characters expertise with traps allows them to rapidly disarm traps or to prepare basic traps on the fly. The character can find or remove traps in one round with only a -4 penalty, if they have the trapfinding proficiency they may find a trap with no penalty. If they succeed in their role to remove a trap by more than 10 they may bypass the trap allowing them and their companions to pass unhindered while leaving it armed. Finally they may reset traps or prepare basic traps using appropriate materials with a remove traps throw.


Thief's have low hit dice, and given the ACKs build system they sit at d4 for humans no matter how you build them. But maybe we can use a synergy relating to the physical pairing to give some survivability.

Here I bring in evasion from older and current versions of D&D. This can help them avoid falling bricks or fireballs alike. This one feels a little shoe-horned into the skills, but the utility is undeniably useful.

Leap from danger (climbing + hear noise): the characters physical training and heightened awareness keep them alert to dangers. This allows them to leap out of the way of collapsing caves or magical explosions relatively unscathed. When making a saving throw to take half damage from an area affect, the damage on a successful save is reduced to zero with only half damage on a failed throw. Character may only be wearing light armor.


Here I linked from thief to the adjacent physical as I had a cool idea. I do wonder if i should use this synergy to add a +2 bonus to pick pockets, it lacks a proficiency that gives it a bonus and a synergy could be a good way of doing that. For now I have not and have written it up as follows:

Evaluate mark (pick pockets + hear noise): the characters keen ear and experience with acquiring carried wealth enables them to listen to the jingle of coin and see the bulge of pockets on a potential mark and assess the value of their goods. Before making a pickpocket check the character may make a hear noise throw to determine the value of goods available to a pickpocket test. If the Judge has Axioms 8 they can use the article “what’s in its pocket’s” to determine the result.


Now that we have eight they map out like this, blue for original, green for new: 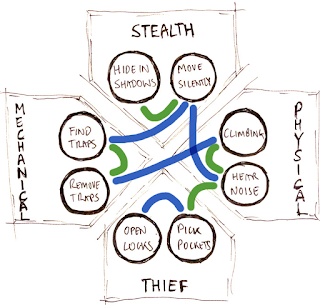 With eight synergies there are too many to give them all. Considering the summary of the Patreon article was that only two of the eight skills were on par with spells, there are six skills that are underpowered. Therefore three synergies (three pairings from the six) seem fitting for a thief. This lines up with the allocation of points in the build systems making that rating seem like a natural cap to the number of synergies gained. Key though is you must take thief skills to get the synergies, so classes that use thief rating for powers don’t get the synergies. Also taking skills as magical spells as the suggested alternative would also not grant synergies.

Based on this the maximum number of synergies gained from taking thief skills is equal to the build points allocated to the thief value.


I don't plan to make any more synergies for now, I fear it could get overwhelming, plus it's fun to wait for inspiration to strike. I will most likely explore backstab synergies as a separate theme, given backstab is already very effective I am cautious to throw synergies on it right now.

Next time I will align these eight synergies with thief proficiencies to build some thief templates or archetypes. This will help explore the impact on play style of synergies based on those selected.
Posted by Darren W at 14:44